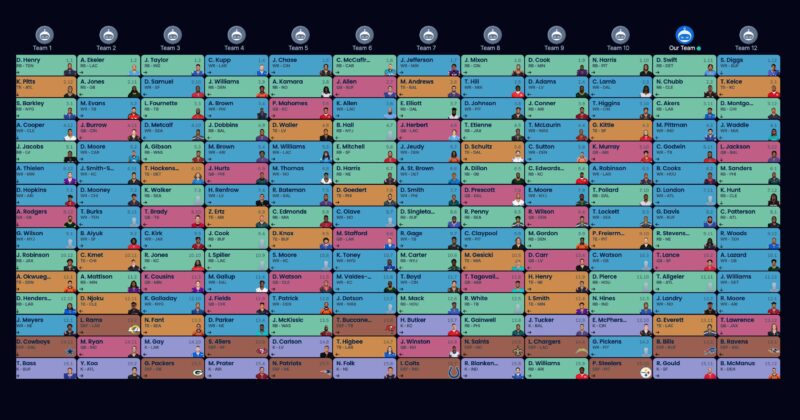 We’re going to go through a 15-round, 12-team PPR Mock Draft via Sleeper and build a draft strategy for Pick 11.

Pick 11 blows. It is the absolute worst slot in a 12-team draft. You miss out on all the great running backs and perhaps one or two of the best receivers, and you don’t even get to make back-to-back picks because there is one more team after you. You wind up taking two suspect players, perhaps even reaching for them, and then you don’t pick again for a long time. The teams at the top of the draft have better first and third round picks than you and their second-round picks probably aren’t as much a “reach” as yours is. This is a point where I sometimes have no choice but to go wide receiver heavy and look for running back bargains later.

Here’s a little outline of how I like to target positions from the 11 slot. This is just a guideline, though, because I will be flexible and look to add the best value possible.

Round 1 – D’Andre Swift, RB/DET
Yeah, I don’t really like the 11 slot. At all. You get underwhelming options at this point, guys who should probably be taken in the middle of Round 2, if not the end of it. Plus, you have to wait a long time until Picks 3 and 4, which are also worse than the earlier teams in your draft. So, after four rounds, you’re already at a distinct disadvantage from the top half of the teams in your league. But, we don’t whine and cry; we just soldier through. I think Swift is a reach here because he hasn’t proven it yet. But if he stays on the field, he’s going to put up solid numbers.

Round 2 – Nick Chubb, RB/CLE
Chubb in a PPR league is just lukewarm, but I believe in going robust RB and Chubb is still a great back running the football. With a looming Deshaun Watson suspension, the Browns are going to have to lean on Chubb even more than usual and he could still have a huge year.

Round 3 – Cam Akers, RB/LAR
Yep, I’m going to continue to hit the running back position here, especially knowing that the team after us doesn’t have one yet. Akers has the talent to be a backend RB1, and the likelihood of being a strong RB2 … and we get him as our RB3. I’m good with that.

Round 4 – Michael Pittman, WR/IND
When you go running back-heavy, you’re faced with a slimmer wide receiver depth chart; at least at the top of it. I love Pittman, but I like him better as my WR2. Still, with three strong running backs, we can load up on receivers from this point forward and play the depth game.

Round 5 – Chris Godwin, WR/TB
Godwin was cleared for camp and his ADP is shooting up the ranks. I still think he has Round 2 talent, and we got him in the fifth round. Yes, he is surrounded by other talent in the offense which might cloud his projections. But I think he is a strong PPR play and I think he’ll do well … as long as he comes back healthy!

Round 6 – Brandin Cooks, WR/HOU
Just to secure our bases, we’re going to continue to hit the receiver depth chart. Cooks has been one of the most unheralded wide receivers in recent years because he consistently puts up strong fantasy numbers and does it without a lot of fanfare. He’s still his team’s No. 1 receiver — by a lot — and I expect he’ll produce once again this year.

Round 7 – Drake London, WR/ATL
I’m going with the upside here. London is expected to contribute immediately in a Falcons offense devoid of receiving options. Kyle Pitts is likely the team’s top receiving weapon, but London could see a lot of volume as well.

Round 8 – Gabriel Davis, WR/BUF
Talk about another upside play here. Davis showed a lot of growth and promise last year, especially in the playoffs, but he hasn’t yet proven he can handle a larger target share. But he plays in an explosive offense, and as our fifth wide receiver, he could be a lottery ticket that pays off big time.

Round 9 – Rhamondre Stevenson, RB/NE
I like the upside of Stevenson here. I don’t think it’s out of the realm of possibility that he overtakes Damien Harris at some point this season. And even if he does not, I think he will be the team’s leading touchdown rusher and that carries FLEX appeal with it.

Round 10 – Trey Lance, QB/SF
Status check: we went running back-heavy out of the gate and then drafted five straight receivers. So we have five receivers and four running backs. We are the only team without a quarterback. And if it were me, I would not take a second one. But other teams have and do, and this is the round — or the 11th — that Trey Lance usually goes in. So, I’m taking a shot on Lance here because I don’t think he’d come back to us. With his rushing ability, he could have mid-QB1 upside.

Round 11 – Tyler Allgeier, RB/ATL
I think Allgeier has the chance to start and I’m willing to take that chance here. We already have four running backs, so even if he fails, it’s not like we’re depending on him. He’s a good lottery ticket to play.

Round 12 – Jarvis Landry, WR/NO
I’ll scoop up Landry in Round 12 every time. I think he’s a safe floor play who could very well anchor our FLEX position each week if we needed him to, even though I think we have enough talent above him where that won’t be necessary.

Round 13 – Gerald Everett, TE/LAC
We’ll probably play the streaming game with tight ends, but Everett is worth the first crack here. He has underwhelmed in his career despite having such talent upside. But if you’re going to take a swing at someone, it better be an unknown who plays in a high-octane offense at the very least, and that’s exactly what Everett does.

Round 14 – Buffalo Bills, DST/BUF
Time for that fun pick of a defense. Yay. Let’s go with the Bills, who have recently had a consistently strong defense.

Round 15 – Robbie Gould, K/SF
Good as Gould? Yeah, sure. His leg hasn’t fallen off yet.

I hope this Pick 11 draft strategy along with its application in a mock draft has given you some general guidelines and principles in how to maximize your roster from this draft slot.