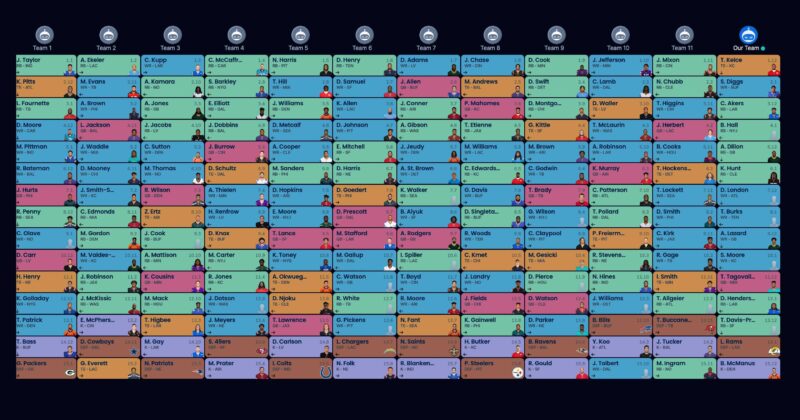 We’re going to go through a 15-round, 12-team PPR Mock Draft via Sleeper and build a draft strategy for Pick 12.

Pick 12 stinks, I’m not going to lie. It could be worse, though: Pick 11 is atrocious. You miss out on all the great running backs and some of the best receivers. You wind up taking two suspect players, perhaps even reaching for them, and then you don’t pick again for a long time. The teams at the top of the draft have better first and third round picks than you and their second-round picks probably aren’t as much a “reach” as yours is. This is a point where I sometimes have no choice but to go wide receiver heavy and look for running back bargains later.

Here’s a little outline of how I like to target positions from the 12 slot. This is just a guideline, though, because I will be flexible and look to add the best value possible.

Round 1 – Travis Kelce, TE/KC
I like pick 12 better than the 11 slot, but I’m still not crazy about picking at this end of the draft board. I’m not a “zero RB” guy because I think it’s a rotten strategy, but in this case, I want to go with high-target, high-volume players and Kelce is going to continue that role this season.

Round 2 – Stefon Diggs, WR/BUF
You can copy and paste what I wrote for Kelce in this spot. Diggs is going to continue to be a focal point of that Bills passing offense and I don’t want to miss on our first two picks. You just can’t. If your first two picks fail, you’ll be playing from behind the entire season and that’s what I think will happen if you select running backs who are only “iffy” at the turn.

Round 3 – Cam Akers, RB/LAR
I don’t feel crazy about Akers as our RB1, given his injury history, but I like his value at the end of Round 3, beginning of Round 4. If he stays healthy, he very well could put up RB1 numbers in that explosive Rams offense.

Round 4 – Breece Hall, RB/NYJ
I feel better about Hall at the end of Round 4, but that certainly means he’s not getting back to us at the end of Round 5. This is the dilemma of picking at the turn. You have to take some guys a little earlier than expected because there are 22 players that will go before your next pick.

Round 5 – A.J. Dillon, RB/GB
Because we got a late start on the running backs, we’ll continue to hit them up here. Dillon could see a huge uptick in carries this season even though Aaron Jones is still there. Jones will likely see a lot of action in the receiving game and Dillon is ready to break out in a big way.

Round 6 – Kareem Hunt, RB/CLE
I love Hunt as a PPR play in just about any year, but particularly so this season. Given that Deshaun Watson is likely to miss some time, I think the Browns will go into checkdown mode even more. Plus, they’ll carry the ball a lot more and I think all of those touches will not go exclusively to Nick Chubb. They’ll rotate Hunt in to help keep the running backs fresh. Hunt as our RB4 is good value.

Round 7 – Drake London, WR/ATL
I’m not wild about a rookie as our WR2, but given our strength at WR1 and TE, I think it will suffice. London will definitely be a high-volume player and with his talent and ability, he should have a decent ROI.

Round 8 – Treylon Burks, WR/TEN
Swinging back around on the turn, we’re going to take another high-volume rookie in Burks. Yeah, I know, there were concerns about his weight and his asthma, but I think those are overblown. He reported to training camp in great shape and I think he’s primed for a good season.

Round 9 – Allen Lazard, WR/GB
Just to secure our bases, I’m going with one more receiver here who I think will be his team’s No. 1 option. Lazard has yet to prove himself in four seasons as a pro, but with no Davante Adams in the lineup and because he’ll be catching passes from Aaron Rodgers, I like Lazard’s prospects this year, especially as our No. 4.

Round 10 – Skyy Moore, WR/KC
Status check: we have our tight end in place, four wide receivers and four running backs. We can go in any direction here and I think I like the upside of Moore. How do I feel about three rookie receivers? Not great. But I like our running backs and I think all we need is just one of these rookies to step up in Year 1 and compete for FLEX duties.

Round 11 – Tua Tagovailoa, QB/MIA
Here’s my philosophy on Tua: it baffles me how low everybody is on Tua, and yet at the same time, how high they are on Tyreek Hill and Jaylen Waddle. Sorry, folks, but something has to give. If Hill and Waddle are both listed as Top 20 receivers — borderline Top 15 — then Tua needs to have a great season. And if he doesn’t, then I feel sorry for those owners who reach for Hill and Waddle. If he isn’t great for us, we’ll stream quarterbacks anyway.

Round 12 – Darrell Henderson, RB/LAR
I was tempted to go with Jameson Williams here, I really was! Why not add another rookie receiver? No, that would have been overkill. Instead, because we have Cam Akers, I thought Henderson was good value here as a handcuff.

Round 13 – Tyrion Davis-Price, RB/SF
The 49ers have not had a consistent No. 1 running back for longer than I care to remember. A lot of people are high on Elijah Mitchell, but I just can’t get behind that, given Kyle Shanahan’s track record. Therefore, I’m taking a flyer on TDP because the Niners certainly are fond of Trey Sermon.

Round 14 – Los Angeles Rams, DST/LAR
Going with the Super Bowl champs, because, why not?

Round 15 – Brandon McManus, K/DEN
And with my Mr. Irrelevant pick in this particular draft — face it, these kickers are all irrelevant — I’m going with the guy I usually do.

I hope this Pick 12 draft strategy along with its application in a mock draft has given you some general guidelines and principles in how to maximize your roster from this draft slot.