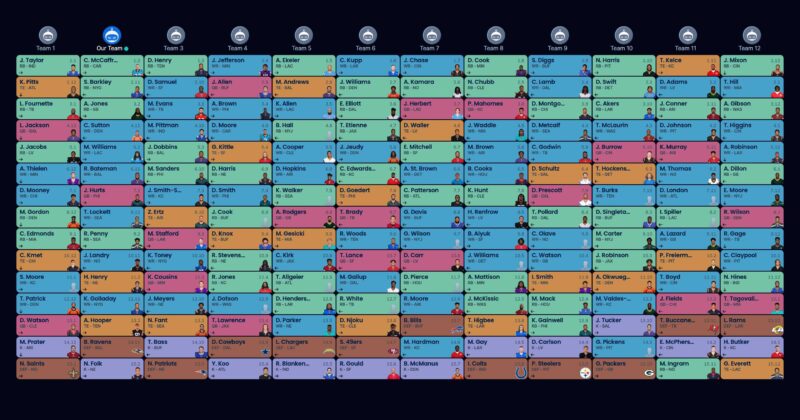 We’re going to go through a 15-round, 12-team PPR Mock Draft via Sleeper and build a draft strategy for Pick 2.

At Pick 2, we have the opportunity to go with the “Hero RB” strategy if we so choose. That’s where we take a running back in the first round and then obliterate the wide receivers thenceforth. But I still prefer to get two running backs in the first two rounds if the value presents itself.

Here’s a little outline of how I like to target positions from the 2 slot. This is just a guideline, though, because I will be flexible and look to add the best value possible.

Round 1 – Christian McCaffrey, RB/CAR
I’ll hold out hope that whoever drafts first does not take Jonathan Taylor, but it’s only slim hope. I have to be prepared for someone else here. As expected, in this mock he does indeed get selected and then I’m stuck with a dilemma already. When Christian McCaffrey is actually healthy, he’s unbelievable. He’s a machine. The only problem is that he hasn’t been healthy. For two straight years. A one-year, one-time injury I can stomach. That happens to a lot of guys. Twice is a trend. Nevertheless, I’m going to roll the dice on CMC here because he’s just so good.

Round 2 – Saquon Barkley, RB/NYG
There’s a long time to wait until it gets back to us in Round 2. I like to look for Travis Kelce or Mark Andrews if possible since they are so far ahead of the rest of the tight ends and provide a weekly statistical advantage. Kelce almost never does, but Andrews sometimes slides. In this particular mock draft, neither one does last to our pick, so I’ll have to pivot in another direction. I like to go running back heavy early on because it gets thin pretty quick. We already selected one running back who has had trouble staying healthy the past two years; I feel a little trepidation going with two. Then again, I feel Barkley is finally healthy and ready to break out again.

Round 3 – Aaron Jones, RB/GB
I rarely go with three running backs to start the draft, but will do so in certain situations. Covering my bases in the event I have two running backs with injury histories qualifies as one of those scenarios. In case CMC or Barkley suffer another untimely injury, I like the addition of Jones in the third round. Yes, he will split the workload with A.J. Dillon. But he could also lead the team in receptions given the lack of quality options in the Green Bay receivers room. There will be a long time to wait until our next pick and several good receivers will be off the board by that point. But it’s okay because the depth is strong.

Round 4 – Courtland Sutton, WR/DEN
As expected, several good receivers went in Rounds 3 and 4 before this pick. But I’m still comfortable with the available receivers at this point. Both Jerry Jeudy and Courtland Sutton were available at this point, but I went with the latter because I truly believe he’ll be Russell Wilson’s No. 1. And even if he’s not, I think Wilson is in for a big season and will look Sutton’s way quite often. Sutton is a big-play receiver. A 50/50 artist who is a great target in the red zone. I think Russ will absolutely love looking his way. I’m curious what the owner at the turn will do with his next two picks before our Round 5 selection. He previously took a tight end; will he now look for a quarterback? Ideally, he will avoid a wide receiver since that’s what we should target again.

Round 5 – Mike Williams, WR/LAC
Strangely, the owner in slot one has yet to select a receiver. He’s gone with three running backs, a tight end and a quarterback. Fortunately, that gives us another choice at receiver to bolster that position. Jeudy is still available, but I don’t like the idea of selecting teammates as our top two receiving options. There are a few receiving options that have normally given me pause in Marquise Brown and Mike Williams, who have had inconsistent careers thus far. I know Brown pairs up with his old college quarterback. But I really like Justin Herbert and the Chargers’ offense, and I think the AFC West will be a “wild west” of a shootout this year. I think we should go with Williams here. In Round 6, we’ll evaluate whether there are any quarterbacks or tight ends that offer good value, otherwise we’ll hammer the receiver position again.

Round 6 – Rashod Bateman, WR/BAL
Here’s where it pays to watch the draft board. Indeed, there is a quarterback available who I think is good value and has a chance to break out. And that’s Jalen Hurts. We could take him right here, but then we wouldn’t be getting good value. Why? Because the team in slot one already has a quarterback and they aren’t going to take another one here. What they do not have is a wide receiver through five rounds, and my hunch is that they will take two of them at the turn. We, too, could use another receiver, so let’s take one of those in this round and then snag Hurts in Round 7. I think Bateman is bound to have a big season. He’s his team’s clear No. 1 option and even though the Ravens intend to run more, I like him as our third option.

Round 7 – Jalen Hurts, QB/PHI
Sure enough, Team 1 selected a pair of receivers and Jalen Hurts slid right back to us. I normally wait on quarterbacks until the later rounds unless a good value presents itself, and Hurts in Round 7 is one such deal. Let’s go with Hurts here who could put up Top 5 numbers because he is so dangerous with his legs. I don’t expect any tight end value to be available when it swings back around to us in Round 8, so we’ll keep an eye on running back and receiver.

Round 8 – Tyler Lockett, WR/SEA
Yep, as expected, the tight end position is dry right now so we’ll punt that position down the road. With three running backs and three wide receivers, we could go in either direction with this pick. At first blush, we’d like to go with another wide receiver since our three running backs were at the top of the board. However, Team 1 is in a similar situation in that their top three non-quarterback and non-tight end players were running backs as well. They waited until Rounds 6 and 7 to select their first receivers, so there’s a good chance they would take at least one more wideout with their next two picks. Therefore, I think we should take the good value here that is presenting itself and go with Tyler Lockett. He doesn’t have a great quarterback situation, but for a WR4 on our team, this is not bad value here.

Round 9 – Rashaad Penny, RB/SEA
I’m a little surprised that Team 1 did not take a wide receiver with at least one of their two picks in Rounds 8 and 9. They went with two running backs instead, giving them five now. Color me surprised. The team went with Melvin Gordon and Chase Edmonds, leaving us with two less options at the position. No biggie. There still remains a starting running back out there who is projected for a workhorse role and that is Rashaad Penny. I know he hasn’t been the model of a healthy running back and has had a disappointing career so far. But I also know that the Seahawks offense will rely on the run game this year and Penny has a chance at a great season. For a fourth running back in the ninth round, you can’t ask for much better.

Round 10 – Jarvis Landry, WR/NO
Status check: we have a quarterback, four running backs and four wide receivers at this point. We could look for a tight end here or keep pounding the running back and receiver positions. Unless a good value at tight end presents itself, I think we should do the latter. As it turned out, I don’t like the value of the wide receivers available at this point. There are several unknowns available at this point, and I’m not wild about the players available. This is where we have to be flexible and able to adapt to the situation. I actually like the value of Jarvis Landry at this spot. He’s a known commodity and there is uncertainty about Michael Thomas’ health. The team drafted rookie Chris Olave in the first round, but it could take a little bit for the rookie to get his feet wet. I think Landry will get a ton of targets early.

Round 11 – Hunter Henry, TE/NE
Amazingly, Team 1 selected Cole Kmet, a second tight end to slot behind Kyle Pitts. I have no idea what they are doing. There are two teams between this pick and our next pick that do not have a tight end yet, meaning there are at least four potential spots where another tight end can go. I’m not going to wait any longer and I think we should go with Henry here. He’s a strong red zone target and seemed to build a rapport with Mac Jones last year.

Round 12 – Kenny Golladay, WR/NYG
There’s no chance Team 1 selects a third tight end … right? But they will be interested in adding to their receiving corps, I believe. They only have three of them at the moment, so there’s a good chance they add another at the turn. We have four picks left and two of them are reserved for a kicker and a defense. This leaves us with two choices left to make. I like the idea of adding another tight end to bolster our depth at the position, but we’ll wait until Round 13 since it is unlikely Team 1 selects a third. I have not been the biggest Kenny Golladay fan there is, and his first season with the Giants was a disaster. But I am a fan of Brian Daboll and think he can get something out of Golladay this season. He’s not a bad sixth receiver for us.

Round 13 – Austin Hooper, TE/TEN
As expected, Team 1 did not select a third tight end at the turn — although they did draft a backup quarterback (what is going on with them?). I like the value of Hooper here. I think he is due for a rebound after a disastrous stint with Cleveland. Ryan Tannehill likes to throw to the tight end and he has reportedly been building a rapport with Hooper.

Round 14 – Baltimore Ravens, DST/BAL
It’s time for the obligatory and dreaded defense and kicker picks. I’m quite surprised to see the Baltimore Ravens available at this slot so I’ll be glad to scoop them right up.

I hope this Pick 2 draft strategy along with its application in a mock draft has given you some general guidelines and principles in how to maximize your roster from this draft slot.