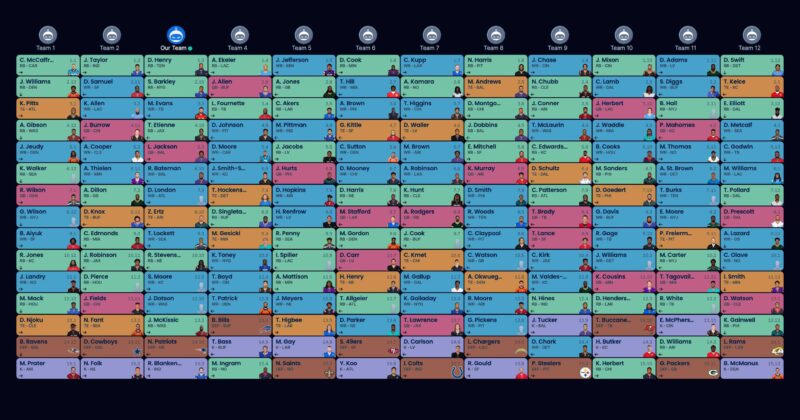 We’re going to go through a 15-round, 12-team PPR Mock Draft via Sleeper and build a draft strategy for Pick 3.

At Pick 3, we have the opportunity to go with the “Hero RB” strategy if we so choose. That’s where we take a running back in the first round and then obliterate the wide receivers thenceforth. But I still prefer to get two running backs in the first two rounds if the value presents itself.

Here’s a little outline of how I like to target positions from the 3 slot. This is just a guideline, though, because I will be flexible and look to add the best value possible.

Round 1 – Derrick Henry, RB/TEN
It was tempting to look Austin Ekeler’s way or perhaps at Dalvin Cook. But I think there is a greater chance that Ekeler regresses than Henry gets hurt again and misses significant time. I know Henry is getting up there in age and he takes a lot of punishment and endures a lot of wear and tear. But he’s a workhorse and it’s difficult to find anyone who can match his weekly output. When it comes back to our next pick, I’ll of course be looking at a Top 2 tight end if available, another running back if it’s good value, or a top receiver.

Round 2 – Saquon Barkley, RB/NYG
I’m always nervous taking a guy who has had recent injury issues, but I think this is Barkley’s year to rebound and put up strong numbers. He’s in a contract year and he’ll be given a head coach in Brian Daboll who knows how to run an offense. As a No. 2 running back on our team, I couldn’t be more pleased. Unless a stud running back slips to our third pick, I’ll be looking for a receiver next.

Round 3 – Mike Evans, WR/TB
This was a tough call. Leonard Fournette and Mike Evans, the Tampa teammates, were both on the board here. I was awfully tempted to go with Fournette and really solidify the backfield, but I think Evans is going to be a beast this year and I just couldn’t let him pass by. In the next round, I like to go receiver again because there is so much talent available at the position in Round 4.

Round 4 – Travis Etienne, RB/JAX
I’m calling an audible. And this is where it is good to be flexible with your draft strategy. I think Etienne at the back of the fourth round is very good value and I’d love for him to be our third running back here. I expect a few more receivers to go before our next pick, but I’m not worried about the position because it’s so deep.

Round 5 – Lamar Jackson, QB/BAL
I’m actually going to call another audible. Once again, I was surprised to find a good value on the board and I will forego the receiver position again and snag Lamar Jackson here. I think the Ravens will run the ball more this year than they did last year and I think Jackson will also improve as a passer with the emergence of Rashod Bateman. This could affect our receiver depth chart a little bit, but I think if we find some players with upside in the next couple rounds, we’ll be just fine.

Round 6 – Rashod Bateman, WR/BAL
Speaking of Bateman, he slid to us in Round 6 and we’ll complete the Baltimore stack. Bateman is primed for a breakout year and I’m definitely comfortable with him as the second receiver on our depth chart. There are a few players who could be available when it wraps back around to us next round. Let’s see what transpires.

Round 7 – Drake London, WR/ATL
Excellent. I was hoping London would be one of the players that remained on the board for our Round 7 pick and he was. With so few options in Atlanta, I think London will be one of those rookies who has a strong first season. He should be next in line behind Kyle Pitts in targets. There are a lot of picks until our next one. We’ll probably hit the receiver or running back position again, depending on what presents itself.

Round 8 – Zach Ertz, TE/ARI
I like Ertz at this pick. I think with DeAndre Hopkins out for the first six games, Ertz is going to be heavily relied upon. I don’t want to take a chance that Team 2, who is without a tight end, will use one of his next two picks before ours to snag him. When the board gets back to us, we’ll look to see whether running back or wide receiver provides the best value.

Round 9 – Tyler Lockett, WR/SEA
Sure enough, Team 2 selected Dawson Knox one pick after Ertz, so I’m pleased we went with the latter in Round 8. At this point, we needed some more receiver depth and I think Lockett as a fourth wide receiver in Round 9 is good value. By our next pick, we’ll be getting closer to “upside” territory.

Round 10 – Rhamondre Stevenson, RB/NE
Status check: we have three running backs and four wide receivers to go with a quarterback and tight end. It’s the makings of a solid team. With this selection, I was pleased that Stevenson was still on the board. I think he takes a massive leap in Year 2 and is a strong fourth option. When it snakes back around to us, I’m hoping to land another receiver.

Round 11 – Skyy Moore, WR/KC
Perfect. This is an area of the draft where I like to take some swings at upside. We have three more picks until we’re required to select a defense and kicker. Moore honestly has as good a chance as any receiver on the Chiefs to step up and produce this year with Patrick Mahomes throwing to him.

Round 12 – Jahan Dotson, WR/WAS
I’m thrilled that Dotson fell this far! He has a good chance to step up and be the No. 2 receiver in Washington early in the season. That’s not going to make him a stud, by any means, but it’s not bad for a sixth receiver whom we can later trade to a team in need.

Round 13 – J.D. McKissic, RB/WAS
With our last pick before the defense and kicker rounds, I thought we should look at the running back position again for more depth. McKissic won’t exactly have a shot at a full workload, but the Commanders really wanted him back this offseason and they will be using him in a pass-catching role, with some rushing interspersed.

Round 14 – New England Patriots, DST/NE
We’re going to go with the Patriots’ defense in this round because … well, why not? Belichick usually has his boys ready to play.

Round 15 – Rodrigo Blankenship, K/IND
Sure, why not? At what other position in pro sports can a dweeb be a playmaker? The Colts have a pretty good offense.

I hope this Pick 3 draft strategy along with its application in a mock draft has given you some general guidelines and principles in how to maximize your roster from this draft slot.