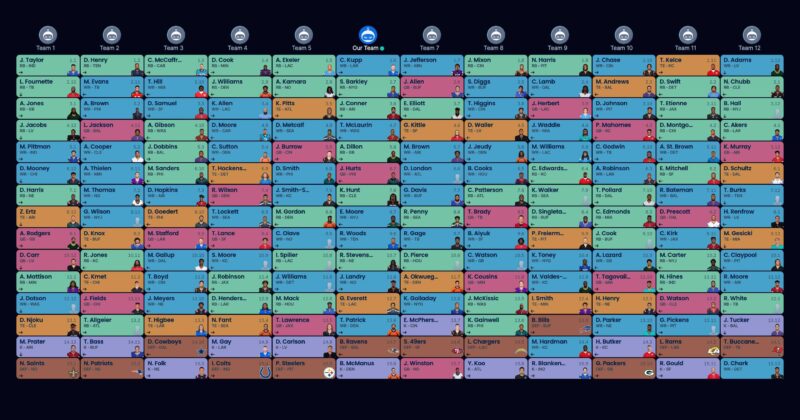 We’re going to go through a 15-round, 12-team PPR Mock Draft via Sleeper and build a draft strategy for Pick 6.

At Pick 6, depending on the strength of a particular draft, the “Hero RB” strategy starts to decline. Suddenly, some great receivers look pretty attractive, especially in PPR leagues. I still prefer to get two running backs in the first two rounds if the value presents itself.

Here’s a little outline of how I like to target positions from the 6 slot. This is just a guideline, though, because I will be flexible and look to add the best value possible.

Round 1 – Cooper Kupp, WR/LAR
We’re right smack-dab in the middle of the first round — and every round thereafter — so there’s a chance that the ideal running backs will be gone by the time it gets to us. Maybe not, though. Some wide receivers are going off the board in quite a few drafts before this pick, so we could get one. As it turns out in this particular mock draft, the Top 5 running backs are off the board, leaving Cooper Kupp available, which will activate my intended draft strategy for this draft slot. We’ll be looking for a running back in Round 2.

Round 2 – Saquon Barkley, RB/NYG
Take a chance on the guy who could miss time to suspension, or the one coming back from an injury? I’m rolling the dice on Barkley missing fewer games than Alvin Kamara this season. I think he’ll stay healthy this season and have one of his best seasons since his rookie year. We’ll, of course, look to back him up with some depth in the rounds ahead.

Round 3 – James Conner, RB/ARI
Conner had a career year in 2021 thanks in large part to the 18 touchdowns he amassed. I’m expecting some regression there, but I don’t expect him to lose his status as a bellcow. This is a guy who has struggled with injuries in the past, too, but how many running backs really remain pristine? Round 4 is typically a good one for wide receivers, but let’s see if there are any more running backs of value at that point.

Round 4 – Terry McLaurin, WR/WAS
I wasn’t fond of the running backs available at this point in Round 4, so I think we’ll snag Terry McLaurin, who provides solid WR2 talent for us. Fresh off a new contract, McLaurin will receive the bulk of his team’s targets and provides big-play upside. There are a few running backs that I’d love to snatch up in Round 5, who I think will still be there when we’re on the clock. Let’s find out.

Round 5 – A.J. Dillon, RB/GB
Yep, sure enough, Dillon remained on the board for our pick and I love the value here. I think both he and Aaron Jones will be fantasy worthy this season with Dillon getting the bulk of the carries as Jones gets a lot of receiving work. Dillon has high RB2 potential. At this point, I feel good about the top of our depth chart. We’ll address the best available player in Round 6 at whatever position that may be.

Round 6 – Jalen Hurts, QB/PHI
I’m not wild about the board at this point at either the running back or receiver positions. I do love the chance to select Hurts here. He could be in line for a huge season as he’s always a threat to pick up fantasy points with his legs but also has a better receiving corps at his disposal. We’ll look for a receiver in Round 7 to add to our depth chart.

Round 7 – Kareem Hunt, RB/CLE
I was interested in a receiver at this point in the draft, but I couldn’t pass up adding Kareem Hunt. I don’t love the running backs that remain after him, but there is plenty of receiver depth. Might as well take our fourth running back here at tremendous value.

Round 8 – Elijah Moore, WR/NYJ
The availability of Moore here confirms that Hunt was the correct selection last round. I know everyone has their worries about the quality of Zach Wilson and the addition of Garrett Wilson, but Moore has big-play potential and is a worthy FLEX start. We can keep hammering away at wide receivers with upside as the draft moves on.

Round 9 – Robert Woods, WR/TEN
There was a run on quarterbacks and tight ends since our last pick — good for us! That left some good options at receiver on the board. I like the floor of Woods with this pick. The Titans are not a high-volume passing offense, but Woods will enter the season as the team’s No. 1 receiver until Treylon Burks can be brought up to speed. Woods should have decent FLEX appeal when and if we need him this year.

Round 10 – Rhamondre Stevenson, RB/NE
Status check: we have a quarterback, four running backs and four receivers. I’m not thrilled with the tight ends available at this spot, so we’ll continue to mine for good value. Stevenson has really good upside and could have a breakout year. Not a bad selection for our fifth running back. We’ll look at some receivers with high ceilings in the next round.

Round 11 – Jarvis Landry, WR/NO
Change of plans. That’s the thing about draft strategies: you have to be flexible. I was eyeing rookies Skyy Moore or Jameson Williams, but they got sniped before our pick here. Instead, I like the stability of Landry here. I think his veteran savvy offers good FLEX appeal, and he might even be trade bait if he gets off to a good start should Michael Thomas miss any time.

Round 12 – Gerald Everett, TE/LAC
We have two more picks before the defense and kicker rounds at the end of the draft. We need a tight end and I’m going to take a chance on Gerald Everett, who is moving to a good offense with a great quarterback. He’s worth a flyer.

Round 13 – Tim Patrick, WR/DEN
I really like the value of Patrick here. He’s in a high-powered offense, although he’ll be surrounded by a lot of other bodies. If Courtland Sutton or Jerry Jeudy miss any time, though, he could bring a good ROI.

Round 14 – Baltimore Ravens, DST/BAL
I’ve been looking at these same defenses in this round over and over and over again. At some point it gets redundant. The Ravens have a fine defensive unit. Go for it.

Round 15 – Brandon McManus, K/DEN
Sure, he plays in the thin air of Denver and for what is expected to be an explosive offense. Works for me.

I hope this Pick 6 draft strategy along with its application in a mock draft has given you some general guidelines and principles in how to maximize your roster from this draft slot.