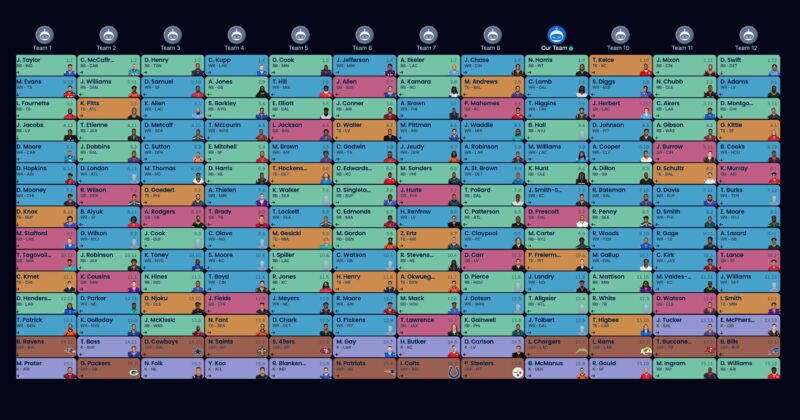 We’re going to go through a 15-round, 12-team PPR Mock Draft via Sleeper and build a draft strategy for Pick 9.

At Pick 9, things start to get a little dicey in the first round. The “great” running backs are probably gone and we’re staring down a decision of selecting a “good” running back or a “great” receiver. The receiver is awfully tempting to me, but I still prefer to get two running backs in the first two rounds if the value presents itself.

Here’s a little outline of how I like to target positions from the 9 slot. This is just a guideline, though, because I will be flexible and look to add the best value possible.

Round 1 – Najee Harris, RB/PIT
I have some concerns about the Pittsburgh offense with either Mitch Trubisky or Kenny Pickett leading the charge, but Harris ought to be a full-on workhorse. The offense will run through him and they’ll do everything they can to get him the ball. He’s a locked and loaded No. 1 option.

Round 2 – CeeDee Lamb, WR/DAL
Lamb is ready to break out in a big way this year. He is an explosive playmaker and he has the upside to be a Top 5 wide receiver. I have no reservations taking him earlier in the second round. We’ll explore getting another running back in Round 3 as long as the value is okay.

Round 3 – Tee Higgins, WR/CIN
We were going to look at running back this round, but I like the value in Higgins. If an all-world player like Ja’Marr Chase wasn’t available in the first round for the Bengals last year, Higgins would be the clear-cut No. 1 in that offense this year. But it doesn’t faze me that Higgins is the de facto No. 2 because there is enough volume in that offense for both receivers to eat.

Round 4 – Breece Hall, RB/NYJ
I’d prefer Hall to be our No. 3 running back, but the pickin’s get slim after this. By the time it gets back to us in Round 5, there will be a shortage of quality starting running backs available. Hall is eventually going to take over the full workload in New York at some point this season. Michael Carter will get his playing time, but once Hall shows what he can do, the Jets can’t keep him off the field.

Round 5 – Mike Williams, WR/LAC
Williams is going to be the No. 1 receiver in an explosive offense, if not this season, very soon. I would take him as a No. 2 receiver on our team, but we get him as our No. 3. He’s going to put up a ton of points presuming, of course, that he stays healthy.

Round 6 – Kareem Hunt, RB/CLE
An RB2 with RB1 upside, Hunt is good third running back to roster. At the very least, he’ll provide weekly FLEX value with his pass catching volume. But if Nick Chubb misses any time, Hunt has proven he can return RB1 value. Next round, we’ll examine any quarterback value, otherwise keep hammering away at running backs and receivers.

Round 7 – JuJu Smith-Schuster, WR/KC
The three teams after us who will each be making two picks before our Round 8 selection all have selected quarterbacks already. Which means it doesn’t make sense to select our quarterback now because I can’t see them making the mistake of selecting a second quarterback so early. Gone are the days of the fantasy of Smith-Schuster being a WR1 in fantasy. I never believed highly in him even when he was posting good numbers in Pittsburgh, and now it’s been a while since he has done anything like that. But in an open receiver depth chart in a high-powered offense in Kansas City, it’s hard to ask for more in a WR4 on our depth chart.

Round 8 – Dak Prescott, QB/DAL
Five receivers went after our last pick, so it was smart to take JuJu when we did and Dak fell right into our laps. I think Prescott will have a terrific season and I expect the Cowboys to remain a high-volume offense even without Amari Cooper there.

Round 9 – Michael Carter, RB/NYJ
I was going to look at tight end with this pick, however, a quick look at the board reveals that we should wait until the next round. Again, the three teams that pick after us each have a tight end, so I can’t envision them drafting a second one. I think Carter is a good value here in the event that the Jets do keep the workload a split a la what the Broncos did with Javonte Williams and Melvin Gordon last year. Or maybe he’s a FLEX value as a pass catcher. Either way, he’s at least a good handcuff to one of our top running backs.

Round 10 – Pat Freiermuth, TE/PIT
As expected, the three teams did not select another tight end with either of their two picks before our Round 10 selection, so we scooped up the highest tight end on the board in Freiermuth. As I mentioned at the top of the article, I have some concerns about Trubisky and Pickett, plus there are some solid receivers in this offense for ‘Muth to contend with. But at the very least, he remains a viable red zone target and he has good athleticism to receive passes up and down the field as well.

Round 11 – Jarvis Landry, WR/NO
Status check: we have a quarterback, tight end, four running backs and four wide receivers. We’re really balanced and can go in any direction here. I’m going with the safe floor guy, Landry. When the Saints signed him this offseason, he immediately hit it off and connected on the field with Winston. We don’t know what is going on with Michael Thomas, but even if he plays, the Saints figure to pass enough to give Landry FLEX appeal.

Round 12 – Tyler Allgeier, RB/ATL
We’re going to take a shot on the Falcons’ rookie running back here. The Falcons don’t have a true No. 1 running back as Cordarrelle Patterson is more a hybrid RB/WR and Damien Williams has never proven to be a full-time No. 1 option. With the Falcons expected to be in rebuild mode this year, I wouldn’t doubt that Allgeier gets his crack at significant playing time.

Round 13 – Jalen Tolbert, WR/DAL
I continue to be high on the Cowboys’ rookie receiver given Michael Gallup’s return for injury. And early reports say that Tolbert is connecting well with Prescott. We really have a stack going on Cowboys players here. But as our sixth receiver, he’s not a bad flyer to take.

Round 14 – Los Angeles Chargers, DST/LAC
Okay, defense and kicker time (imagine my eyes rolling). I like the Chargers even in an explosive division. The addition of Khalil Mack will really help.

Round 15 – Brandon McManus, K/DEN
That Broncos offense is really going to be strong this year and give their kicker a lot of scoring opportunities.

I hope this Pick 9 draft strategy along with its application in a mock draft has given you some general guidelines and principles in how to maximize your roster from this draft slot.