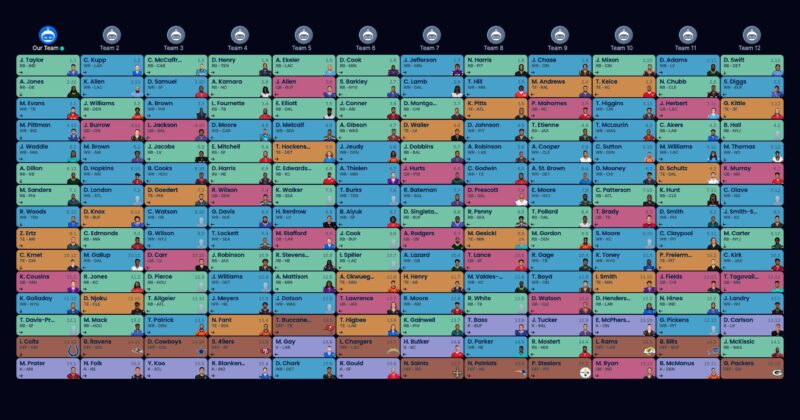 We’re going to go through a 15-round, 12-team PPR Mock Draft via Sleeper and build a draft strategy for Pick 1.

At Pick 1, we have the opportunity to go with the “Hero RB” strategy if we so choose. That’s where we take a running back in the first round and then obliterate the wide receivers thenceforth. But I still prefer to get two running backs in the first two rounds if the value presents itself.

Here’s a little outline of how I like to target positions from the 1 slot. This is just a guideline, though, because I will be flexible and look to add the best value possible.

Round 1 – Jonathan Taylor, RB/IND
Taylor is the general consensus top overall pick. It’s a combination of his talent, his production last year and what’s to be expected this year. He’s one of the few workhorse running backs in the league. He has a high floor, perhaps the highest of the backs, and one of the best ceilings (the honor of the best would presumably go to Christian McCaffrey, who is a freak of nature when healthy). Short of injury — which you can say for every player — I don’t think you can go wrong with Taylor.

Round 2 – Aaron Jones, RB/GB
Some people like to go tight end or quarterback here, but I wouldn’t spend a premium draft pick at a deep position like quarterback. I also wouldn’t go with a tight end outside Travis Kelce or Mark Andrews this early in the draft. We could go with a wide receiver here and employ a hero RB strategy, but with some good available talent at a premium position like running back, I like that direction in this spot. Jones could be the leading pass catcher in Green Bay and that’s juicy for a PPR league.

Round 3 – Mike Evans, WR/TB
We won’t be picking again for a while, an unfortunate consequence of picking at the turn. Quarterbacks and tight ends likely will go before it gets back to us. That’s fine because I subscribe to the “great or late” tight end strategy, and quarterbacks are definitely a “late round” strategy, unless a tremendous value pops up. Since I already have the best running back along with a strong No. 2, it’s time for the receiver. I absolutely love Evans this season. With Chris Godwin possibly out for some time, Evans could have a huge season. And even if Godwin does play early in the year, this Bucs offense throws a ton and Evans is the beneficiary in the red zone.

Round 4 – Michael Pittman, WR/IND
As I expected, a handful of quarterbacks and tight ends went in between our Rounds 3 and 4 picks, and that’s perfectly fine with me. More running backs and wide receivers for us! And since we’re already set at the top of the depth chart at running back and we’re in the “dead zone” anyway — and since this is a great area for wide receivers — it’s a good time to nab the other starting receiver. I’ve been in love with Pittman as a prospect since his rookie draft. The Colts’ war room likened him to Vincent Jackson, and I think that’s an apt comparison. I selected him in dynasty drafts that year and watched him flash as a rookie and have a great sophomore season. Now, I think he’s ready to explode with his best quarterback yet, Matt Ryan, throwing to him.

Round 5 – Jaylen Waddle, WR/MIA
With pairs of running backs and receivers already on board, we can go in either direction — since there is no great value at quarterback or tight end right now. However, because Taylor and Jones are as good a backfield as there is in this particular fantasy draft, and since there are several other great receivers available at this spot, we should look at receivers again. I have my reservations that Tua Tagovailoa can support two Top-15 or even Top-20 wide receivers as so many are projecting, but with Jaylen Waddle falling all the way to Round 5 here, we have to take a chance on him here. Especially as our No. 3 wideout.

Round 6 – A.J. Dillon, RB/GB
We’ve got two running backs and three wide receivers at this point. I still would advise against selecting a quarterback and tight end isn’t even visible on the horizon. This is a good spot to explore adding a third running back. I normally don’t advise stacking teammate running backs on your fantasy squad because the vast majority of NFL teams can’t support two starting-quality backs. But the Packers are one of the few and the proud, especially with Jones expected to get more work as a receiver to help their ailing receiving corps. I think Dillon provides a great value at this point and can actually get more rushing attempts than Jones as he did last year.

Round 7 – Miles Sanders, RB/PHI
We’re at a crossroads at this point, I think. We have three running backs and three wide receivers. Plenty of quarterbacks remain and tight ends will be kicked down the road. We could go wide receiver here, but I’m actually impressed with the quality of running backs available here and we could always trade one of these later when desperate owners come calling. Miles Sanders, who, I’d say, has far underperformed expectations in his short career, has fallen this far. As a second running back, I’d say “hard pass” on him. However, given that he’d be our fourth running back and he’s still his team’s No. 1, let’s scoop him up here.

Round 8 – Robert Woods, WR/TEN
A few more quarterbacks and tight ends have gone since our last pick. There’s only one other team without a quarterback, so I’m not going to reach for one at this point. I would consider a tight end here, but only if I’m not enamored with the wide receivers available. We’re four-deep at running back, and unless one with screaming value jumps off the page, we’ll pass on adding another one for now. I think Robert Woods is a good value with this pick. He’s likely his team’s No. 1 option until Treylon Burks can be brought up to speed. And even in a low-volume, run-first offense, finding a No. 1 receiver at this point is good value.

Round 9 – Zach Ertz, TE/ARI
I would normally keep looking at running backs and wide receivers for value. However, there is a tight end who has fallen into a range where I feel comfortable taking him. There are two other teams without tight ends, and there’s a good chance either of them would snag this guy within the next 24 picks until our next selection. Ertz certainly is getting up there in age, but with DeAndre Hopkins suspended for six games, I like Ertz’s chances of having a good start to the season. Maybe we ride him throughout the season, or trade him when his value is still high.

Round 10 – Cole Kmet, TE/CHI
Status check: in my opinion, we have excellent starting running backs and receivers and strong depth at both positions as well. There are six rounds left with two of them, regrettably, reserved for a defense and kicker. Since you never draft kickers until the final round, and because I wouldn’t draft a defense until second-to-last either, we’re going to finally look at quarterback, while also looking for another positional player of value. Since we have a back-to-back here, we’ll look for the latter first. We’re getting to the stage in the draft where taking a shot on rookies with upside or veterans with higher floors and lower ceilings are the two choices to ponder. I also like to consider a backup tight end, if we don’t get one of the great ones earlier in the draft. Right now, Cole Kmet is calling my name. In Chicago, Justin Fields is too good and their receiving corps is too questionable for Kmet not to see an uptick in volume this year. I like him as a possible long-term solution in case Ertz doesn’t sustain season-long value when Hopkins returns.

Round 11 – Kirk Cousins, QB/MIN
Now, we finally look at our quarterback. There are some youngsters we can look at — I know a lot of people are high on Trey Lance to break out. I’d prefer to go with dependable and reliable at this point. The Vikings are under new leadership with head coach Kevin O’Connell, who came from the high-powered Rams. If Justin Jefferson is going to continue to be among the league’s elite receivers — as almost everyone is projecting — he’s going to need continued success from his quarterback. I think Cousins is a reliable pick here.

Round 12 – Kenny Golladay, WR/NYG
We have two picks left before we’re forced to take the obligatory defense and kicker. So, at this final turn of “real” players, where do we go? We have our quarterback and two tight ends. We have really strong depth at running back and receiver. If there were a young quarterback available, I would consider taking the shot on him, but they’re all gone at this point. So, we’ll hit the waiver wire for a backup when needed. We should take a shot on Golladay at this point. He flopped with the Giants after signing a big deal but he got a new head coach in Brian Daboll. If ever he’s going to return value, this would be the year. If he doesn’t, it’s okay since we have good depth anyway.

Round 13 – Tyrion Davis-Price, RB/SF
This is the spot where we take an upside swing. What are the 49ers doing? Shanahans love running backs and hate your fantasy teams. You can never “rely” on a 49ers running back; you can only buy a lottery ticket and hope it cashes in. Last year it was Elijah Mitchell’s chance. This year, let’s see if they once again surprise us by going in a different direction.

Round 14 – Indianapolis Colts, DST/IND
I’ve got no analysis for you. We’ve got to take a defense here and I like the Colts, even though they’ve lost defensive coordinator Matt Eberflus to the Chicago Bears. They still have playmakers there.

Round 15 – Matt Prater, K/ARI
Where’s my blindfolded monkey? Here, Bubbles. Take this dart and throw it at the corkboard. Okay, Prater it is.

I hope this Pick 1 draft strategy along with its application in a mock draft has given you some general guidelines and principles in how to maximize your roster from this draft slot.