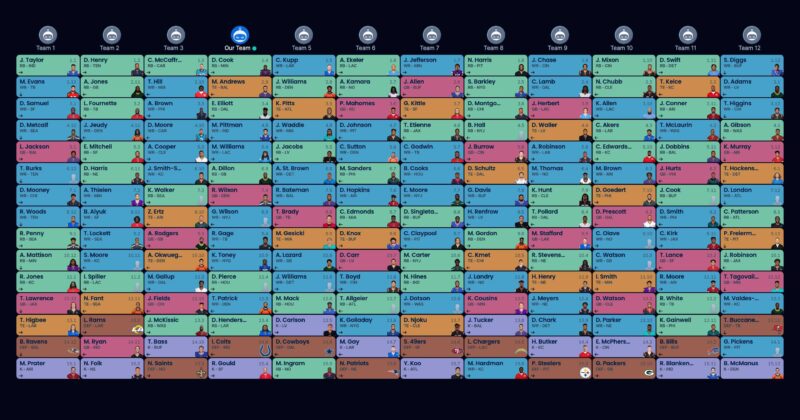 We’re going to go through a 15-round, 12-team PPR Mock Draft via Sleeper and build a draft strategy for Pick 4.

At Pick 4, we have the opportunity to go with the “Hero RB” strategy if we so choose. That’s where we take a running back in the first round and then obliterate the wide receivers thenceforth. But I still prefer to get two running backs in the first two rounds if the value presents itself.

Here’s a little outline of how I like to target positions from the 4 slot. This is just a guideline, though, because I will be flexible and look to add the best value possible.

Round 1 – Dalvin Cook, RB/MIN
The further your pick gets into Round 1, the tougher decision you have regarding whether you should take a running back or snag a top receiver. At Pick 4, I still think there are quality backs available and it’s important to snag a good one at such an important position. I like Cook a little better than Austin Ekeler here. I worry about Cook’s propensity to get injured, but he’s so good in the games he does play, and their offense is going to be more explosive this year.

Round 2 – Mark Andrews, TE/BAL
In Round 2, I like to look for one of the Top 2 tight ends because they create such value. And as luck would have it, Mark Andrews indeed fell to us at this slot. Snagging one of the elite tight ends gives you an edge each and every week of the season. When it swings back around to our pick in Round 3, we’ll look at the running backs available and secure some depth behind Cook.

Round 3 – Ezekiel Elliott, RB/DAL
I think Zeke is fully healthy this year after struggling through injury for most of last season. A lot of people have shied away from him because of his down year, but I think he’s primed for at least one more solid year. In Round 3, I think he offers good value. With two strong running backs and a stud tight end, it’s time to look toward the receiver position.

Round 4 – Michael Pittman, WR/IND
I like Pittman a lot, but I’d like him a lot more as a WR2 than as our top option. But that’s a small price to pay when you go tight end early. It just means we’ll have to continue to address the position throughout the draft and keep adding value. We can look at snagging another one next round.

Round 5 – Mike Williams, WR/LAC
I like Williams here. He’s fresh off a contract extension and plays in an explosive offense with a great quarterback. He’ll definitely solidify the starting lineup. I’m curious if a quarterback run will start now before our next pick. This is usually when it happens. If one slides to us and offers good value, I’m not afraid to snag him in Round 6. Otherwise, we’ll look for best available talent.

Round 6 – A.J. Dillon, RB/GB
Sure enough, three quarterbacks went since our last pick, but I don’t regret taking Williams there. I’m not going to reach for one of the available quarterbacks at this point. I want to solidify the other positions. I like Dillon’s prospects of leading the Packers in rushing attempts again and he might even separate himself from Aaron Jones even further. He helps solidify our run game in the event that Zeke truly is done.

Round 7 – Russell Wilson, QB/DEN
I think Wilson is headed for a major rebound season. Maybe not Peyton Manning record-breaking type first season with the Broncos, but awfully good. I’m happy to land him here in the seventh round. I’ll be honest, when you take a tight end and quarterback early, it leaves one of your other positions a little more vulnerable, and that would be the case for our receiving corps. But receiver truly is deep and I feel good about a lot of young talent. We’ll try to snag some with our next few picks.

Round 8 – Garrett Wilson, WR/NYJ
Wilson has the ability to be really freaking good. The only thing that gives me pause about him is his quarterback situation. But his talent to separate and make plays after the catch gives him high upside even as a rookie.

Round 9 – Russell Gage, WR/TB
Tom Brady is high on Gage, and that’s good enough for me. With Chris Godwin likely to miss some time, Gage could have a big start to the season. And even in three receiver sets, Gage can still post fantasy relevant numbers.

Round 10 – Kadarius Toney, WR/NYG
Status check: we’ve got three running backs, four wide receivers, a quarterback and a tight end. Pretty good balance as we head down the stretch. Toney is a boom-or-bust product, in my opinion, but if he booms he would provide terrific value here. As a fifth receiver, I’ll take the chance on his athleticism and Brian Daboll’s ability to get the most out of him in his offense.

Round 11 – Dameon Pierce, RB/HOU
There’s a good chance in a bad Houston offense without a firm running back depth chart that Pierce will get some playing time. If he seizes the opportunity, he could bring good ROI in Round 11.

Round 12 – Tim Patrick, WR/DEN
We’ve got two picks left before our defense and kicker, and we’ll continue to hammer away at the best available talent when it presents itself. There are a lot of mouths to feed in Denver, but Patrick has good size and a chance to step in and put up strong numbers if Sutton or Jeudy were to miss any time with injury.

Round 13 – Darrell Henderson, RB/LAR
Henderson has some competition with rookie Kyren Williams, but I’ll take the flyer on the veteran first and foremost. In an explosive offense such as the Rams have, if Henderson got any length of playing time, he instantly offers value.

Round 14 – Indianapolis Colts, DST/IND
Okay, the obligatory defense pick. Who are we going to stream first? I like the Colts and they’re playing against the Texans in Week 1.

Round 15 – Robbie Gould, K/SF
Let’s go with “good as Gould.” He’s older than dirt, but the 49ers should have a good offense.

I hope this Pick 4 draft strategy along with its application in a mock draft has given you some general guidelines and principles in how to maximize your roster from this draft slot.