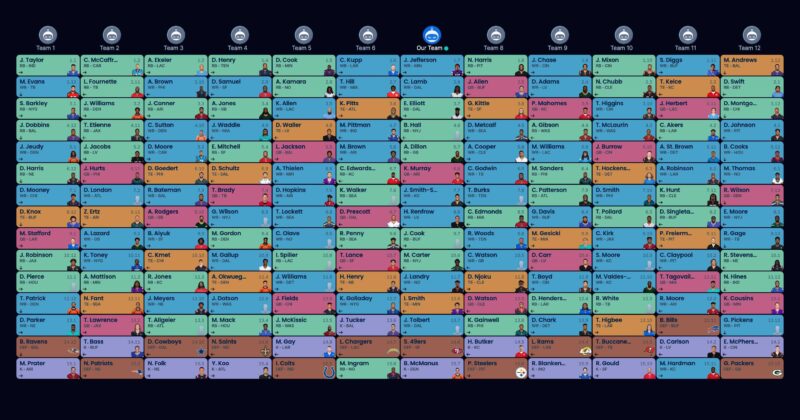 We’re going to go through a 15-round, 12-team PPR Mock Draft via Sleeper and build a draft strategy for Pick 7.

At Pick 7, depending on the strength of a particular draft, the “Hero RB” strategy starts to decline. Suddenly, some great receivers look pretty attractive, especially in PPR leagues. I still prefer to get two running backs in the first two rounds if the value presents itself.

Here’s a little outline of how I like to target positions from the 7 slot. This is just a guideline, though, because I will be flexible and look to add the best value possible.

Round 1 – Justin Jefferson, WR/MIN
With Cooper Kupp off the board and the top tier of running backs, I think Jefferson is a solid choice in this slot. Jefferson could make a play for the top overall receiver spot this season. We’ll look at best available pick in Round 2.

Round 2 – CeeDee Lamb, WR/DAL
Lamb fell into our laps in the second round and I had to scoop him up. The move, of course, leaves our backfield in the lurch, but we’ll navigate our way through that moving forward. For now, it’s hard not to get excited about a receiving corps led by two target hogs like Jefferson and Lamb.

Round 3 – Ezekiel Elliott, RB/DAL
I think a lot of people got scared off by Elliott after last season due to his dip in production, and the fear that he has hit the veteran running back wall. But I think last year’s numbers were the result of playing through an injury all season. I know that as an older back, he runs the risk of breaking down, but presuming health, he has good upside for a Round 3 pick.

Round 4 – Breece Hall, RB/NYJ
I was hoping either Hall or David Montgomery would slide to us at this pick, and sure enough the rookie landed in our laps. I absolutely love Hall and think he’ll have a beastly year, perhaps winning Offensive Rookie of the Year. Some are worried about Michael Carter interfering in that quest, but I think Hall eventually becomes the bellcow. We have a nice combination of running backs and receivers so far, so we can continue to look for best available next round.

Round 5 – A.J. Dillon, RB/GB
I’ve become very fond of Dillon in the fifth round. I think with the Packers’ receiving corps in the lurch, the offense will rely even more heavily on the run game. And I expect Aaron Jones to factor more into the passing game, leaving Dillon with the majority of the carries.

Round 6 – Kyler Murray, QB/ARI
Murray just inked a big deal, got his old college receiver in a trade, and will start this season healthy. I know he won’t have DeAndre Hopkins for the first six weeks, but he should make a play for Top 5 quarterback numbers. He’s a real good value in Round 6. We can go in any direction in Round 7.

Round 7 – JuJu Smith-Schuster, WR/KC
A lot of people are down on Smith-Schuster, but I think there’s a door open in Kansas City for him to put up WR2 numbers. He’s not a bad value as our WR3 in Round 7. The AFC West is a high-powered division where there will be a lot of scoring and it doesn’t hurt JuJu to have Patrick Mahomes slinging him the ball.

Round 8 – Hunter Renfrow, WR/LV
The addition of Davante Adams will not hinder Renfrow’s success as much as some fear. He’ll still be part of the Raiders’ offensive game plan. In fact, the team inked him to a contract extension even after paying big money to Adams.

Round 9 – James Cook, RB/BUF
I don’t expect Cook to be a bellcow by any means — and if he were, he would be drafted a lot sooner than this. But the Bills are a high-powered offense who made every effort to improve the backfield with a pass-catching back. If Devin Singletary gets injured or falters, it opens the door for Cook to a bigger role. But at the very least, I think Cook has FLEX appeal if he hits the ground running.

Round 10 – Michael Carter, RB/NYJ
Status check: we have a quarterback, four running backs and four wide receivers. We can go in any direction here, so I like to keep hitting the best available player. Adding Carter here as a handcuff to Hall seemed like good value because I think Carter will still be used in the offense as a change-of-pace back. I’m not sure he’ll be a weekly FLEX play by any means, but he’s our fifth running back and a good handcuff.

Round 11 – Jarvis Landry, WR/NO
I wasn’t wild on the available wide receivers at this point, so I went with a high-floor guy in Landry. With the uncertainty surrounding Michael Thomas’ health, and with Chris Olave expected to have some kind of learning curve, Landry could put forth some FLEX-worthy games this season.

Round 12 – Irv Smith, TE/MIN
With only two selections remaining before the defense and kicker rounds, now was a good time to target our tight end and Irv Smith fell into our laps. He was the top player available, according to ADP, and he could see an uptick in numbers as the clear-cut TE1 on his team and with the installation of a more high-powered offense.

Round 13 – Jalen Tolbert, WR/DAL
We’re looking for players with upside at this point, who aren’t buried on their teams’ depth charts or playing for bad offenses. With Michael Gallup being brought back slowly from injury, Tolbert could have a prominent early season role. And if he seizes that opportunity, who knows?

Round 14 – San Francisco 49ers, DST/SF
The later draft slot that we have (and assuming we have an odd number of rounds), the better defense we seemingly will get if most teams wait until the final two rounds to fill their defense and kicker spots — as they should. The Niners have a solid defense and I’m happy to snatch them up with this pick.

Round 15 – Brandon McManus, K/DEN
The Broncos should have a strong offense this year. Otherwise, I don’t really care…

I hope this Pick 7 draft strategy along with its application in a mock draft has given you some general guidelines and principles in how to maximize your roster from this draft slot.