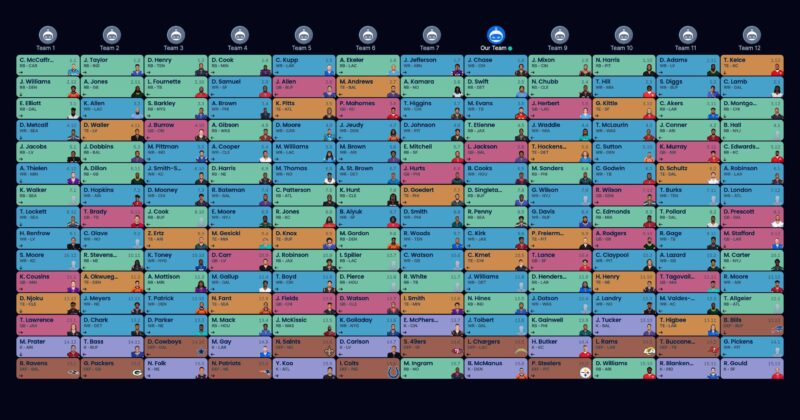 We’re going to go through a 15-round, 12-team PPR Mock Draft via Sleeper and build a draft strategy for Pick 8.

At Pick 8, things start to get a little dicey in the first round. The “great” running backs are probably gone and we’re staring down a decision of selecting a “good” running back or a “great” receiver. The receiver is awfully tempting to me, but I still prefer to get two running backs in the first two rounds if the value presents itself.

Here’s a little outline of how I like to target positions from the 8 slot. This is just a guideline, though, because I will be flexible and look to add the best value possible.

Round 1 – Ja’Maar Chase, WR/CIN
I think last year was only a glimpse into what kind of player Chase can be. Whereas Cooper Kupp has just shown his ceiling and Justin Jefferson likely is atop his game, Chase has more to show. He could single-handedly win you some games. We’re close enough to the turn that I think there will be some good running backs, and perhaps a Top-2 tight end, available with our next pick.

Round 2 – D’Andre Swift, RB/DET
I was tempted to go with Mark Andrews because of the clear advantage that having a tight end of his caliber gives you on a weekly basis, but Swift was too enticing to pass up. Presuming health, I think he has a breakout year. This move gives us two game breakers at important positions. We’ll look best available next round.

Round 3 – Mike Evans, WR/TB
I think Evans at this point of the third round is an absolute steal. Some may fear the amount of mouths to feed in Tampa, but Evans is still the premier red zone threat and Chris Godwin could still miss some time early. Let’s see if there is a decent value at running back in the next round or if we have to go wide receiver heavy.

Round 4 – Travis Etienne, RB/JAX
Michael Pittman was an intriguing option here, but if we don’t go with a running back now, the position gets pretty depleted from here. Etienne is an unproven NFL commodity, but we all know what he was capable of in college and he has the opportunity to really rack up the points, especially in a PPR league.

Round 5 – Lamar Jackson, QB/BAL
I like the selection of Jackson in this range. He has the wheels to really keep the fantasy points rolling each week. I think the Ravens will run a lot more this year than they did last and that just makes Jackson all the more dangerous. We’ll look for the best available running back or receiver in Round 6.

Round 6 – Brandin Cooks, WR/HOU
Perennially underrated and overlooked, Cooks is a solid No. 3 receiver in this round. He’s the clear-cut WR1 in his offense and will be a focal point for the Texans. He’s a solid floor guy despite his ceiling not being very high. But that’s okay, since Chase, Swift, and Etienne had tremendous ceilings for us.

Round 7 – Devin Singletary, RB/BUF
With only two running backs on our team up to this point in the draft, we really needed to add some depth. Singletary might have got some increased competition for touches this offseason but he’s still the Bills’ No. 1 back and it’s difficult to find starters at this point in the draft. Lots of receivers still available.

Round 8 – Rashaad Penny, RB/SEA
Slight reach for Penny here, I believe, but he’s one of the last remaining starters — if not the absolute last one. I don’t think he would have come back to us in Round 9. At this point, we have four starting running backs, which is rare to have. Obviously, Singletary and Penny are not sure things to rack up a ton of fantasy points, but if they were, they’d have been drafted a lot earlier.

Round 9 – Christian Kirk, WR/JAX
I’m not wild about Kirk, but you don’t pay the man $72 million and not intend to use him. By hook or by crook, Kirk will get his hands on the ball and we know he has the explosive playmaking ability to do something with it. I’m happy with him as a fourth receiver.

Round 10 – Cole Kmet, TE/CHI
Status check: we have a quarterback, four running backs and four receivers. We can pretty much go in any direction here. I think we’ll snag our tight end here with the selection of Kmet. He only really has serious target competition from Darnell Mooney and I expect Justin Fields to take a big second-year leap. Without the presence of Jimmy Graham, Kmet should see more touchdowns as well.

Round 11 – Jameson Williams, WR/DET
We’re going to take another upside swing here. When Williams comes back to play, he has the opportunity to really explode on any given week. We know the Lions love him, given their aggressive trade-up in the first round to snag him. We don’t really need him early in the season anyway, and we’ll just have to sit on him for a handful of weeks.

Round 12 – Nyheim Hines, RB/IND
This will probably be the last running back we select, but I couldn’t resist securing the position with Hines. Although he has a low ceiling, he does have FLEX appeal and the Colts said they intend on getting him the ball more this season.

Round 13 – Jalen Tolbert, WR/DAL
With our last pick before the defense and kicker rounds, we’re going with the rookie Tolbert here. He could be a starter early in the season if Michael Gallup is unable to go.

Round 14 – Los Angeles Chargers, DST/LAC
I like the Chargers defense, especially with the addition of Khalil Mack. In a high-powered division, there are lots of dropbacks which can lead to sacks and interceptions.

Round 15 – Brandon McManus, K/DEN
Everyone is expecting big things from the Broncos’ offense.

I hope this Pick 8 draft strategy along with its application in a mock draft has given you some general guidelines and principles in how to maximize your roster from this draft slot.